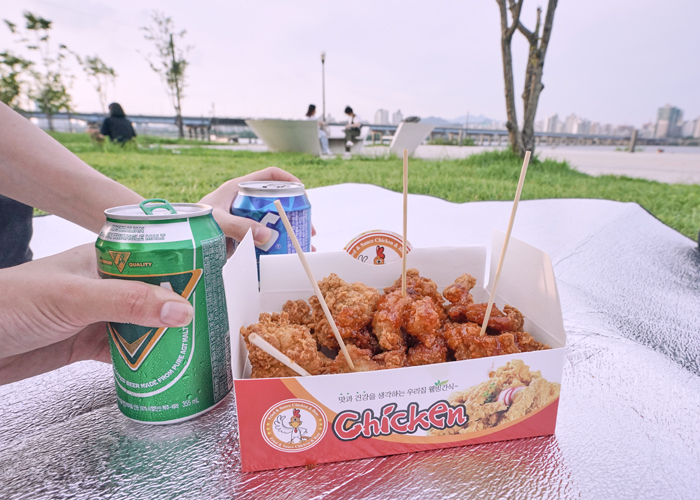 If you haven’t heard about how strong Korea’s food and drink culture is, you must have been living under a very large rock. Koreans are famous for matching foods and drinks like no-one else, and we LOVE it. You know how you save that last bite on your plate, and it has all the best bits in it that all fully add to the experience of the final mouthful of the meal? Well that’s what Korea’s food pairings are like – all parties bring equal parts amazing to the plate. So here they are: the most famous Korean food and drink pairings and where to try them out next time you’re in Seoul!

Check out all the places mentioned in the article on our Google Maps at the bottom of the article.

Note: This list is not entirely vegetarian/vegan or non-drinker friendly, however I will mention where any food/drink item meets non-standard dietary requirements.

Imagine this scene: it’s a warm summer evening, there’s a light breeze, and the sun is slowly setting behind a bridge stretching across the Han River. You have a can of beer in one hand, and a piece of Korean fried chicken in the other. It’s the perfect evening (at least, in my opinion!) and one of the most perfect pairings of Korean food at your fingertips. Korean lagers are very light and fairly carbonated, which cuts through the grease of the fried chicken really nicely.

Tasty Tip: Fried chicken always comes served with cubed pickled radish. If you’re a non-drinker then this works just the same as the beer to counter the fried food grease, and is totally free.

Where to try it: There are so many fried chicken chain restaurants around. BHC and Kyochon are two of the most popular, but those and more all deliver easily to the Han River parks across Seoul. A slightly more upscale chain restaurant offering delivery that is popular nowadays and offers an interesting range of flavours is Puradak. However, the best way to order is to simply grab a flyer from one of the old ladies handing them out at the subway exits and make a phone order, or use a food delivery app to have your order sent right to you at the riverside.

Ask anyone to name a Korean dish and they’ll probably name Korean BBQ, and when questioned on Korean alcohols I have no doubts that soju will be the first mentioned. So it only makes sense that they’re one of the country’s most famous food couples, and it makes even more sense when you try it. Korean BBQ and soju is not just a meal; it’s an entire experience. From the bite-size pieces of grilled meat wrapped in radish, kimchi and lettuce, to the seemingly neverending amounts of banchan (side dishes), the food is a veritable feast. Soju is not quite as decadent and causes, in my experience, the worst hangovers ever, but there’s something about enjoying the heavy meat and garlic packages and washing it down with a crisp shot of soju that is hard to beat.

Tasty Tip: Raw garlic may be reserved for warding off vampires in the west, but here in Korea it’s the perfect accompaniment for your freshly grilled meat. Use a slice to scoop up some salty ssamjang sauce, and put it all together with a slice of pork belly into your lettuce leaf before eating it all whole.

Where to try it: There are thousands of BBQ restaurants across Seoul, so you’ll have no difficulty finding one in whatever neighbourhood you’re looking to dine in. However, tried and approved come Doma in the Hongdae area for beef, Daeseong Galbi in Seongsu-dong for marinated pork, and Gamamok in the Jonggak Youth District for a range of meats and delicious side dishes.

An all-time favourite here at Moon Bear Travel, jeon and makgeolli are one of the most classic Korean food pairings around. With jeon coming in a huge variety – typically savoury pancakes filled with food ranging from seafood to potato, kimchi to beef – it’s no surprise to learn that this food is popular with everyone who visits Korea. Its soulmate, makgeolli, with its acquired taste is less immediately liked, but also comes in many different forms. As a wine made from fermented rice, makgeolli tends to be an acquired taste, but often ends up becoming a makgeolli-drinker’s favourite tipple of choice. Makgeolli and jeon are a pairing for the ages, having been enjoyed by Koreans for centuries, so you’re feasting on history when you enjoy these two together.

Jeon is a good option for vegetarians or other non-meat-eaters. There are many options that don’t include meat, such as potato, pumpkin, and chives jeon. Warning: Be careful with kimchi jeon, as lots of restaurants make their kimchi with small prawns or other seafood.

Tasty Tip: It’s a long tradition to have jeon and makgeolli together when it rains, so check your weather forecast and get to your favourite jeon restaurant early. There won’t be an empty seat on those wet-weather days.

Where to try it: Some of the oldest jeon restaurants in Seoul are located in the Hoegi neighbourhood in Dongdaemun-gu – head over to Ssotddukong Cheolpan Pajeon on Hoegi’s Pajeon Alley for their curry seafood pajeon. Or if you’re looking for a funky, grungy vibe then go to a Moon Bear Travel favourite: Story of the Blue Star in the traditional neigbourhood of Insadong near the palaces.

Whether you’re a high school student or a skilled professional, tteokbokki is a food we can all agree on. There are also so many variations of it (street food, restaurant dish, cheese, super-spicy, skewered…the list goes on) that you’d be hard pushed to say that you don’t like it. But tteokbokki – chewy rice cake noodles cooked in a spicy sauce – is a million times better with its popular sidekick – twigim. Twigim is the name for a big selection of deep-fried foods: dumplings, gim-mari, fish cakes, pumpkin. The spicy sauce of the tteokbokki cuts through the grease of the fried snacks, and they in turn serve as great for dipping and mopping up the leftover sauce. Tteokbokki is also sometimes served with kimbap (seaweed and rice rolls) or soondae (blood sausage), but there’s no denying that twigim is the best counterpart to the ever-popular spicy snack.

Tasty tip: Twigim are delicious, but they do nothing to quell the spice burn. Order a carton of Coolpis to go along with the meal. This non-dairy yoghurt-like drink from the ’80s is cold and sweet, and calms the fire in your mouth caused by the spicy tteokbokki.

Where to try it: You can usually find tteokbokki and twigim at any market serving fresh food – the most popular in Seoul is Gwangjang Market. However, one of our favourite spots to eat tteokbokki is called Dukki. It’s popular among students for its reasonable price and all-you-can-eat buffet (for 90 minutes), but we like it because you can personalise your sauce and choose the types of rice cakes, vegetables and other goodies that go into it. There is also a twigim buffet, and refillable soft drinks. Additionally, there is an entire street called Shindangdong Tteokbokki Town in Dongdaemun, where every restaurant serves the dish in the unique Shindangdong style – made using black bean paste.

Eating at Ddukki is a great option for vegans. Simply ask the server to use water instead of the standard broth base and you’re good to go. However, avoid the twigim – they’re made using eggs.

We all love hot-cold food combinations, and naengmyeon and galbi have to be one of the best. Popular on hot summer days, naengmyeon is Korea’s most famous cold noodle dishes, but people don’t tend to associate it with galbi – marinated pork ribs, or sometimes just the meat from that area. However, once you put them together it’s hard to see why they were ever eaten separated. The naengmyeon is cold and tangy, accompanied by cucumber and pickled radish, and the galbi is hot, soft and sweet. They’re a delicious pairing, and a must-try.

Tasty tip: You can eat naengmyeon as it’s served, and it’s delicious, but try adding the vinegar and mustard that are on the table in every restaurant that serves it. The ice-broth is even more delicious with with a hint of spice!

Where to try it: One of the most famous naengmyeon restaurants in Seoul is Wooraeok. They’ve been open since 1946, and serve their noodles in the popular Pyeongyang (North Korean) style. Their naengmyeon will set you back 14,000W, and a side of galbi is 51,000W. However, if you’re in Seoul on a budget, you should head to Yookssam. It’s a popular chain of restaurants that serve naengmyeon and galbi sets, and for only 8,500W too – you can find them all across Seoul.

‘Mul naengymyeon’ is usually made with a meat broth, so it’s not suitable for vegetarians. However, ‘bibim naengmyeon’ is a broth-less version, so it’s safe for non-meat-eaters, but it is served with a spicy sauce. It’s not traditional, but some restaurants serve their naengmyeon dishes with meat on top, so make sure to check with the server before you order.

Korea has a strong love for its own version of Chinese food. Jjajangmyeon – black bean sauce noodles – is perhaps the best-known of the Korean Chinese dishes that have been created, and nowadays maratang and marashangguo (Sichuan pepper hotpot and stir-fried noodles, respectively) are immensely popular. But one of the best Korean Chinese food couples is lamb skewers and sweet and sour pork. Cook your lamb skewers on a rotating grill at your table, and enjoy the lightly-battered, deep fried pork with sweet and sour sauce – a dish called tangsuyuk, or gguobarou (gwoh-ba-roh-oo). Some places will pour the sauce over before it’s served to you, and others serve it for dipping on the side. Either way, it’s delicious.

Tasty tip: Eating for one? Lamb skewers aren’t so good for solo meals, but lots of places offer tangsuyuk as part of a set, either for dining in or for delivery. Look out for ‘tangjjamyeon’, ‘tangjjabap’, or other three-syllable variations including ‘tang’ at the start. These are the perfectly one-person-sized portions of black bean noodles or rice with a side of that delicious sweet and sour pork.

Where to try it: You can’t really go wrong with the plethora of lamb skewer restaurants sprinkled across the city! A favourite with some of the foodies of Seoul is Cheonrihyang Lamb Skewers in Yeonnam-dong. However, one of Hannah’s favourite places for this pairing is at Unlimited Charcoal Lamb Skewers in Gangnam (무한숯불양꼬치), mainly for its amazing gguobarou which is generally softer than tangsuyuk.

Check out all the places mentioned in this article on this map!

Note: some of the restaurants named in this article are part of a chain, and so there are more locations available than the location saved to this map.

Want more information on where to eat and drink in Korea? Check out all the articles we have for foodies right here!

Keep learning with Moon Bear Travel!
Find us on Facebook and Instagram as @MoonBearTravel, and become one of our supporters on Patreon for even more knowledge on Korea and exclusive benefits.

Hapjeong: Why You Should Skip Hongdae and Head Here