Hanbok Rental in Korea: Everything You Need to Know (Size-Inclusive) 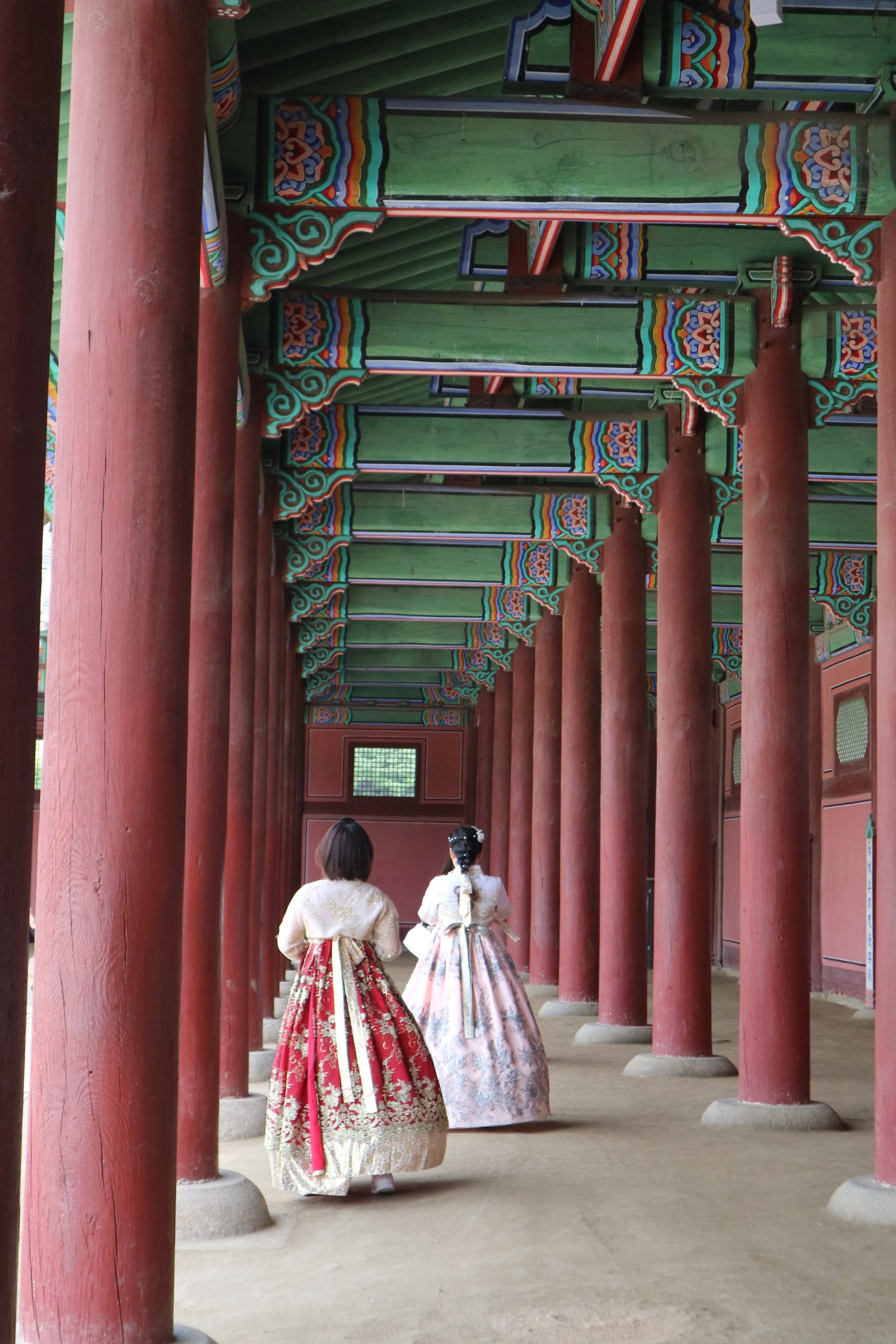 Parts of this article first appeared on www.hannahinternational.co.uk

Wearing the national dress of the country that you’re visiting is a popular activity for travellers all over the world, and Korea is no exception. Trying on Korean hanbok is one of the most popular pastimes for tourists visiting Korea, and even for some of us who live here. The hanbok is a national costume unlike many others and, if you’re a fan of historical Korean dramas, you’ve probably dreamed of dressing like Joseon royalty at least once, and it’s totally possible to do so at many spots across Korea.

The name hanbok literally translates to ‘Korean (han) clothing (bok)’ and is used to refer to both the traditonally male and female versions of the outfit. Both types include, as the basics, a jeogori – the upper garment, which is long for the male style and short for the female – and bottoms, however the female option is to wear a wide, full-length chima (skirt), while the male option is to wear loose-fitting baji (pants) that come in at the ankles. The male hanbok has remained largely unchanged throughout the times, however the female jeogori saw huge transformations throughout the Goryeo and Joseon dynasties, with the length of the jeogori shrinking dramatically from the same as that of the male version to a short, underbust-length blouse. In fact, at one point in Joseon times it was common for women in the lower castes to wear a jeogori so short that it completely bared their breasts – a practice usually done to show others that they had borne a healthy son. However, the modern female jeogori that we see nowadays stops just above the waist.

The hanbok was originally designed for ease of movement and was worn as daily clothing until around 100 years ago. Now, it’s worn mostly on special occasions such as weddings, children’s special birthdays and lunar holidays, though there has been a rise in the popularity of modern hanbok-style clothing, leading to more people wearing it on the daily for its comfort and simplicity.

There is a plethora of hanbok rental shops surrounding most traditional locations in Korea that are popular with tourists. If you’re Korean straight-sized (US 0-8) then you’ll generally have no problem fitting into the standard sizes of rental hanbok, but if you’re anything larger than that then it’s likely you’ll have some difficulty, or at least a smaller selection. This can be quite discouraging, especially if you’re just after having a good time on your holiday. So for the sake of inclusivity, this list only contains rental shops that have been tried and tested by women in the Korea-based plus-size community.

Note: The hanbok on offer in rental shops nowadays are not the most authentic version of the traditional outfit. What you’ll usually find is a style of hanbok, decorated with sequins and lace, that has been created for tourists. While they are still beautiful and I encourage you to enjoy and appreciate the national dress of this country, it is good to recognise that the hanbok available for rent in these shops would not have been seen in the past.

Bukchon Hanbok
Location: 서울 종로구 북촌로 49
Price: 35,000W for 2 hours, including hanbok, hairstyle and accessories
Plus-size friendly: Yes
Note: I haven’t personally tried this shop, but it was recommended in the Plus-Size & Beautiful group on Facebook. Fits up to a US size 18-20/UK size 22-24.

Oneday Hanbok
Location: 서울특별시 종로구 재동 12, 2층
Price: 18,000W for 4 hours including basic accessories. 2,000W extra for special accessories
Plus-size friendly: Yes
Note: I haven’t personally tried this shop, but it was recommended in the Plus-Size & Beautiful group on Facebook. Fits up to a Korean size 160 (around US 28/UK 32).

Seohwa Hanbok
Location: 서울시 종로구 적선동 11, -1층
Price: 20,000W for 4 hours, 28,000 for a whole day, 38,000W for 2 days, including hanbok and standard accessories. Hats and other special accessories are an extra charge.
Plus-size friendly: Yes
Note: I haven’t personally tried this shop, but it was recommend in the Plus Size & Beautiful group on Facebook. Fits up to at least a US 22-24, based on the experience of a group member.

THE REST OF KOREA

이리오너라
Location: 전주시 완산구 태조로 12-8
Price: 30,000W for 2 hours, including hanbok, hairstyle and accessories
Plus-size friendly: Yes
Note: I haven’t personally tried this shop, but it was recommended in the Plus-Size & Beautiful group on Facebook. Fits up to a US size 18-20/UK size 22-24.

All dressed up with no place to go? We don’t know her. After decking yourself out in Korea’s national dress there is a multitude of perfect places to visit for you to walk around, drink in the history, and snap away to find your newest Instagram photo.

Tickets into the five royal palaces in Seoul are very affordable at 3,000W for an adult and 1,500W for under-18s, but the entrance fee is waived for anyone wearing hanbok.

Note: As Allie also mentions in this article, free entry is only officially granted to people wearing the hanbok designated to the wearer’s legal sex. It seems as though this rule varies according to the person working in the ticket booth, but it can and has presented problems with transphobic attitudes.

It goes without saying that Gyeongbokgung – the main royal palace – is the most popular place in Seoul to go to for photos in your hanbok. With the vast majority of rental shops being based in the neighbourhoods both directly east and west of the palace, it’s also the most convenient. But don’t just go and snap photos – discover the history of Gyeongbokgung as you wander round the palace and learn more about the complex than you could in you standard Seoul guidebook.

Read Allie’s Unabridged Guide to Gyeongbokgung here, and use her map to take a tour round the palace and its historical sights.

Changdeokgung and the Secret Garden

Not far from Gyeongbokgung is Changdeokgung. Favoured by many Joseon princes and even (mostly) spared by the Japanese during their invasion of Korea, Changdeokgung is a lesser-visited palace and highly underrated. Also home to the famous Huwon (rear garden) or Biwon (Secret Garden), it makes a quieter and even more beautiful place to visit to learn a little history and take your hanbok photos.

Note: Visits to the Huwon are by guided tour only. Tickets cost 5,000W on top of general admission.

Directly connected to Changdeokgung, Changgyeonggung is a palace that mostly served as a residence for queens and concubines. On its grounds also stands the Daeonsil, a Victorian-style glass greenhouse built in 1907 by Japanese architect Hayato Fukuba with a French construction company. It may not make for a traditional backdrop, but it’s definitely beautiful and offers a different twist on the standard palace hanbok photos.

Everyone wants that photo of them in hanbok in front of a hanok. Traditional Korean homes are beautiful with their distinct architecture, grand wooden gates and tiled walls, and Bukchon Hanok Village is one of the most popular spots in Seoul to visit for a glimpse of these stunning homes. But these days the residents of this historical neighbourhood are justly complaining of too many tourists causing noise, traffic and hygiene issues. So my suggestion is to head out slightly north of Seoul to Eunpyeong Hanok Village instead. It’s a newly developed neighbourhood full of the traditional homes, and is far less visited by tourists than Bukchon or Ikseondong (another old hanok neighbourhood in central Seoul), and so there is far less chance of people walking into the background of your perfect shot.

Read about the best things to do in Eunpyeong in this guide by Hallie from The Soul of Seoul.

THE REST OF KOREA

Gyeongju is a personal favourite of ours, and what more beautiful a city to explore in hanbok? It was the capital of the ancient Silla dynasty, is home to the amazing Gyeongju National Museum, and is also where you can find the famous Daereungwon Tombs showcasing the traditional upper class burial mounds of the Silla period. For a beautiful walk and stunning hanbok shots we recommend a trip to Donggung Palace and Wolji Pond which was historically used to host grand events and parties for Silla kings and important visitors. It’s also worth noting that all the major historical sites (Daereungwon, Donggung Palace and Wolji Pond, Poseokjeong, Muyeol Royal Mausoleum, Janggun’s Mausoleum, and Oreum) all offer free entry to hanbok wearers on Seollal (Lunar New Year’s Day) and during the Chuseok holiday.

See the beautiful sights of this ancient capital city in our Gyeongju photo diary.

So there you have it! Everything you need to know about hanbok and hanbok in the top spots for wearing the national Korean costume in the country! Have any more questions? Or want to share with us your hanbok experience? Drop a comment below or contact us on Facebook or Instagram!

A Guide to the Seoul Museum of Craft Art