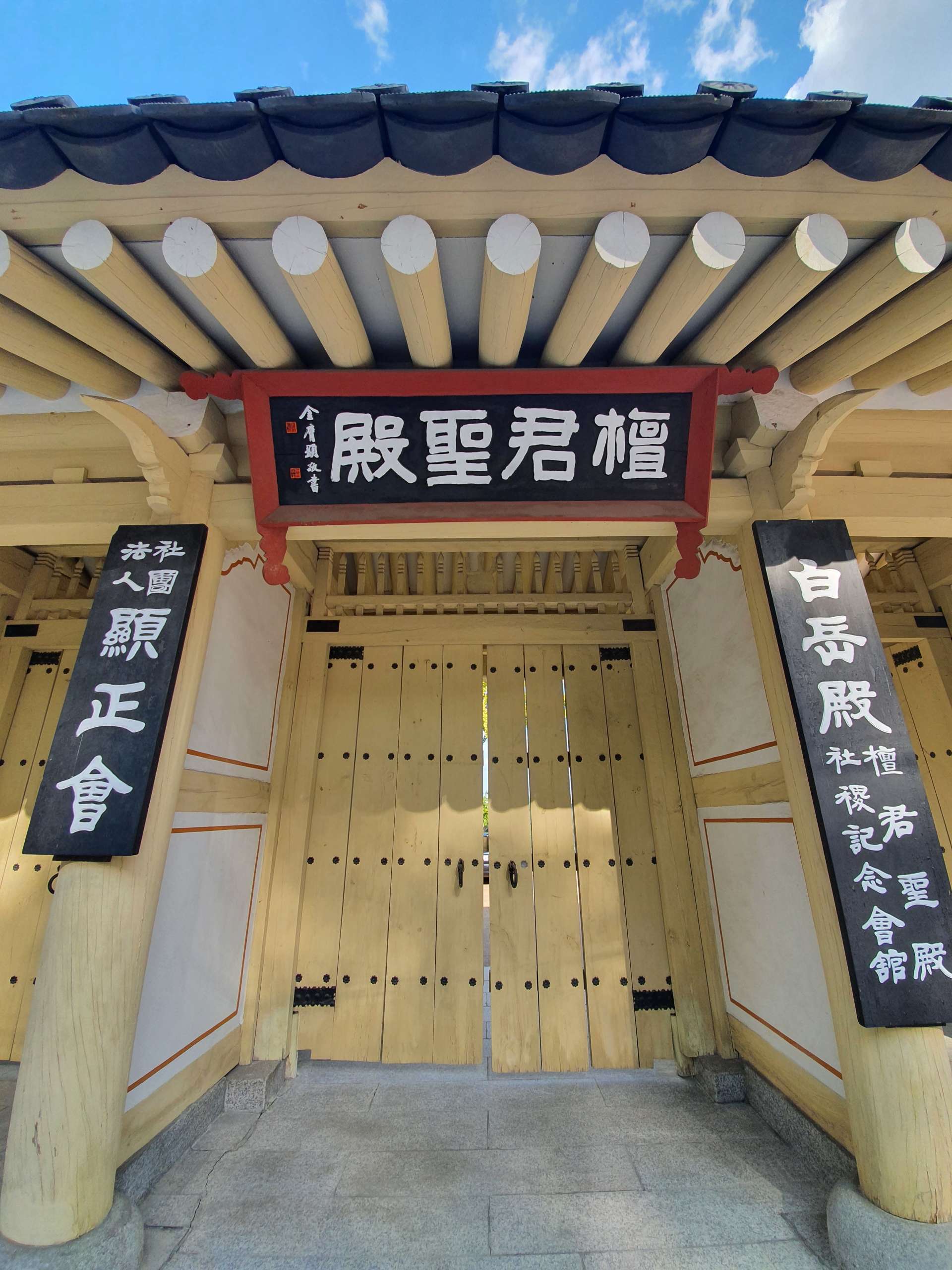 When you explore the pages of your Lonely Planet: Korea travel book, or visit the homepages of the most popular Korean bloggers, you’re going to see one word quite a lot: temples. Temples are scattered around the country’s rural neighborhoods, highest peaks, and bustling city centers. Many are well known to travelers and locals alike – Jogyesa, Haeinsa, and Bongeunsa, to name a few. But what about all of the others? What about the thousands of hidden temples worth seeing? It’s hard to figure out where those are, but don’t worry: we’re here to bring the you the top 5 hidden temples in Seoul.

While most crowds flock to Jogyesa or Bongeunsa, Gilsangsa lingers like a wallflower in the northern Seoul hills. This is not only my favorite temple in Seoul, but perhaps in my top three for all of Korea. There’s nothing particularly extraordinary about it; it’s not made the list of UNESCO heritage site. And yet, when I find myself in its halls, I feel more serene than any other part of the city. It’s a little slice of heaven that one cannot easily reach by foot OR vehicle, making it our number one hidden temple of Seoul.

The grounds – which include a main hall (Gaeukrakjeon – Hall of Ultimate Bliss), cafe, dining hall and Zen Center – have dividers of bushes, a stream, and towering pine trees. Your first thought may be, “This doesn’t seem like any Korean temple I’ve ever been to.” The short answer is: because it wasn’t.

Gilsangsa was originally a famous yojeong (요정), a place where the powerful men of Seoul gathered for discussions, entertainment and general relaxation. The focal point was the restaurant Daewonguk (대원국): home to beautiful gisaengs (기생), or courtesans, who transfixed their male audiences with poetry, music and dance. In 1997, overcome with loyalty to her Buddhist faith, the owner of the restaurant donated the space to the monk Venerable Bupjeong (1932-2010) with the request that it be made into a temple.

Not only can you linger in the tree-shrouded corners, but you can go for a lovely (free!) meal between 12 and 1PM. It’s served cafeteria-style and they ask for anything you can donate. If you want a cozier environment, the bare-foot café and small library upstairs is as charming as you’ll find.

Although you may have seen articles and posts about a Templestay program at Gilsangsa, it currently does not appear to be running.

Opening hours: Subject to change based on events and ceremonies.*

Advertised as one of the largest English-speaking Buddhist centers in Seoul, the International Seon Center is also conveniently located next to the city’s head immigration office. Towering towards the sky with its seven stories, this stunning temple and Buddhist center seems like something straight out of an animation film.

The temple offers 2-hour English meditation programs every weekend, which you can register for via the Meetup website. For those wanting to try meditation for the first time, the Seon Center is a welcoming spot that also offers a cafe and bookstore, as well as a Templestay program.

There isn’t much to speak of in regards to the temple’s history, considering it was only opened on November 15th, 2010! It’s very exciting to see such grand Buddhist centers being built in the 21st century.

I used to live in the neighborhood and would regularly go here to meditate on my own. I stopped visiting here for a few reasons, one being that I moved. One of my favorite and most efficient forms of meditation is Metta Bhavana which is centered around wishing well to others. After a session at the Seon Center, one of the laypeople running the program asked us how we meditated. I answered Metta-Bhavana. She scoffed and stated that they ‘don’t do Metta here’. I was disappointed by her attitude, particularly because this is part of Mahayana Buddhism. The center has also advertised this event to those of any background, so I was even more startled. I believe a famous nun now runs the group sessions. I only want to share my experience in case others find themselves in a similar situation.

Inwangsa Temple is a Buddhist temple associated with another religion of Korea: Shamanism. Inwangsan Mountain (인왕산) is not only famous for its history as a landmark of Seoul, but as an ancient home to shamans. I’ve been lucky enough to see them in action through their exorcisms and readings despite never personally employing them myself. While many Koreans are fearful of shamans due to their ability to communicate with the dead (and an influx in the Christian community), these are not people to be feared. The shamans of Inwangsan help those in need, appease tormented spirits, and console the hearts of the grieving.

Buddhism and Shamanism have been historically linked in Korea for centuries. It comes as no surprise that Inwangsan is home to a Buddhist temple as well as a Shamanic temple. I have visited the Buddhist temple only once; its charm comes not only from the blanket of natural scenery that it wears, but also from the hikes offered alongside it.

When it comes to a temple this old, its story must be told. Some believe that King Taejo (태조대왕), founder of the Joseon Dynasty, established Inwangsa Temple when he established Hanyang (now Seoul) as the capital of Korea. The temple was destroyed, along with much of the country’s architecture and landmarks, during the Japanese Invasions of 1592-1598. It was in a state of disrepair and neglect for most of its life until the start of the 20th century, 1912 to be exact, when Park Sung Muk reconstructed the temple. It started with Seonamjeongsa, (선암정사) currently Bonwonjeongsa (본원정사). More buildings appeared in the following years, leading to about 10 hermitages by 1930. In 1942, these hermitages joined together to become Inwangsa and were formally registered as a sector of Bongeunsa Temple.

Currently, five different demoninations of Buddhist orders make up Inwangsa. And while they are separate, every four years there is an election held for a ‘governer’ of the entire group. This unique ‘colony’ of forms Inwangsa, and should be visited by Buddhists and tourists alike due to its peculiar history.

I find that Inwangsa feels more private. More secretive. Many buildings’ perched location feels akin to a fairytale castle not often reached by the common man. In my experience, it’s best to take this journey alone. Lose yourself in the sound of whispering trees rather than catching the call of a nearby passing car. Perhaps I’m a romantic and a dreamer, but coming to places like this always get my imagination going. What souls were called here to dedicate their lives to Buddhism? What kind of life in the mountain have these people known? I imagine it’s a rich one with many soft-spoken stories to tell.

Our next temple feels more commercial although it seems to have next to no groups snapping Instagram pics. Located a skip and jump away from the Han River, Dalmasa is a unique sight to behold in all seasons. The temple’s website describes itself as an ‘axis’ between three mountains: Namsan (남산), Bukhansan (북한산), and Gwanaksan (관악산). When you’re standing at the top looking down onto the river, you can understand why they’ve painted such a description.

I’ve visited Dalmasa three years in a row during the springtime as its cherry blossoms are something to brag about. The temple compound is small but complex, with large shrine buildings, a restaurant, a small garden, and nearby hiking trails. At all times of the year, visitors can spot monks tending to the lush wildlife outside. These are some of the nicest monks I’ve met in Seoul. Perhaps because they get the beauty of the river, mountains and city to enjoy everyday? I can’t see how there’d be anything to feel sad about.

I dug through a lot of Korean texts about this temple. Here’s what I’ve found. The temple was constructed in 1931 by Monk Yushim but would take 31 years to be listed as part of the Jogye Order in 1962. Many of the main halls were constructed in the late 1960s, and in 1970, a shrine for the Dragon King was built in a nearby cave. More buildings flooded the complex through the 1980s, and it was in 1988 that it became Traditional Buddhist Temple No. 13. This is especially important because it is the only traditional temple in this region of Seoul for over 80 years. And while the compound has held up well over the past several decades, many buildings have been curated during the 2010s. This gives us the best of both worlds: knowing that many of the structures are original, but also getting to see them in their brightly colored glory.

Another special feature of this temple is that it is located next to the grand Seoul Cemetery, which may sound morbid, but is actually a serene place to visit. There is so much to see on this small little mountain, making Dalmasa one of the most important hidden temples in Seoul. Before you leave for your afternoon coffee, make sure you find the secret cave shrine.

*All subway routes require a walk to reach the temple, or a village bus departing from the station exit. For more information on bus routes, please visit the Dalmasa website (Korean only).

Located not far from Inwangsa, this shrine is our only ’temple‘ on the list NOT associated with Buddhism. Perhaps its a bit of a stretch to call it a temple in the first place. This is more of a memorial, a place to pay your respects to none other than the man himself: Dangun.

Who is Dangun? Dangun was allegedly the founder of Gojoseon (고조선) aka the OG Korea. He is a grandson of the Heavens and the son of Hwanung. According to a myth, Hwanung approached a bear and a tiger who wanted to become human beings. He accepted their request by demanding they avoid sunlight for 100 days while eating only mugwort and garlic. The tiger failed the mission, but the bear succeeded and became a beautiful woman. Hwanung married the woman and gave birth to Dangun, the first ‘Korean’ on the Peninsula.

This shrine is one of the largest in the nation to honor Dangun. One reason I enjoy it so much is for its distinct yellow color, which makes for beautiful photographs. The statue of Dangun is a bit cheesy due to its massive size, but it also makes this temple stand out.

The shrine is located next to another Korean history staple, Sajik Park and Altar. This park honored the Gods of the Earth and Harvest. You may find photographs of two Confucian monuments dedicated to Yulgok Yi I and Shin Sa Imdang, but these are no longer there.

Accessibility: Yes, up a slight hill

*I have visited the shrine in the mid-afternoon around 3pm and it has been open.

We hope you enjoyed reading about these hidden temples in Seoul. If there’s any that you feel we should add to our collection, let us know with a comment or reach out to us on Instagram and Facebook. As a final note, remember to be respectful when entering spiritual places such as temples. Not sure what you may be doing wrong? You can learn more with our Temple Etiquette Guide here.

A Historical Tour of the Gwangju Uprising: Complete Travel Guide