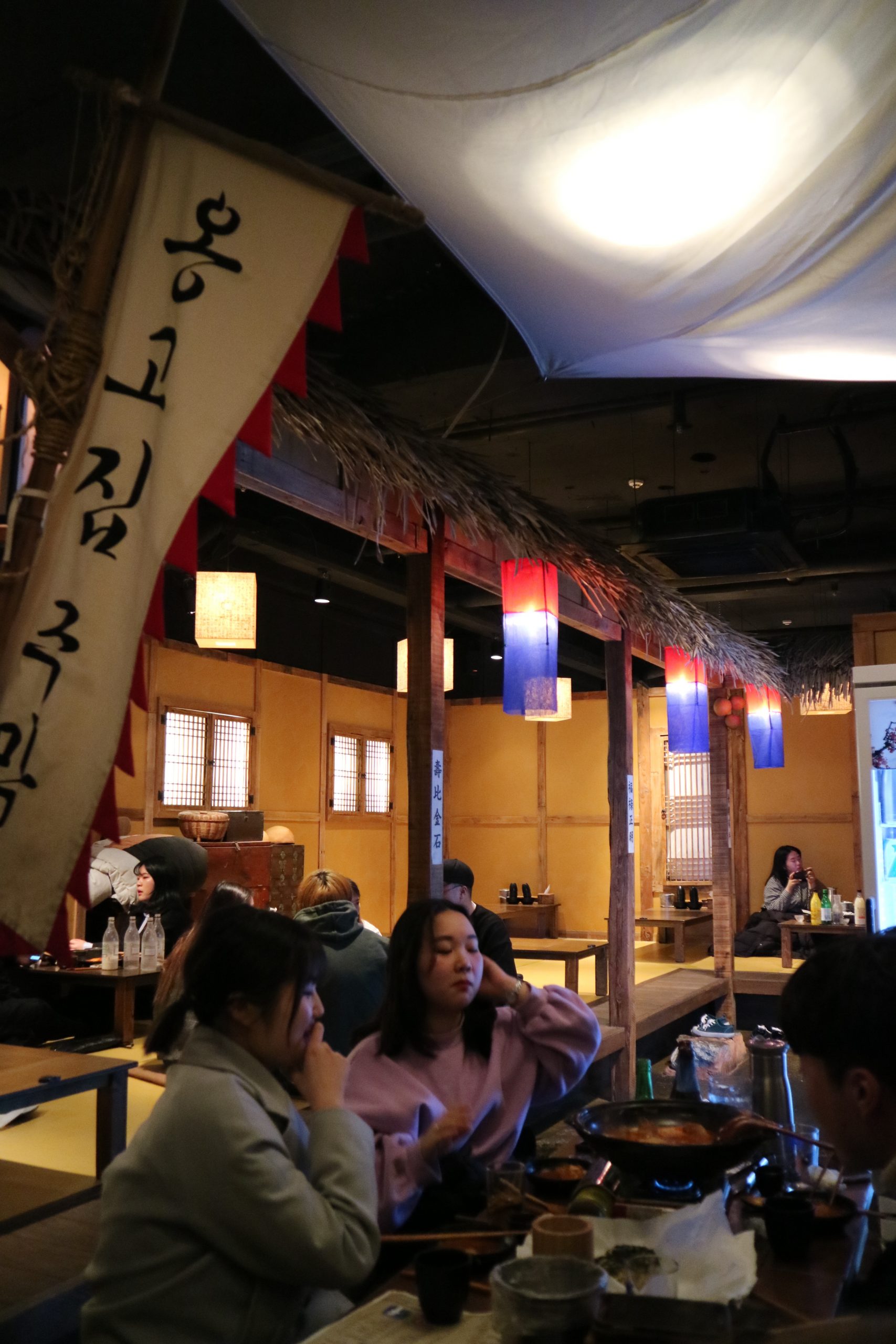 If you’ve read all the Seoul guide books, you’ll know that if you’re into partying you should head to Gangnam, if you’re after a taste of home you’ll make your way to Itaewon, and if you’re into boutique shopping then Ikseon-dong is where you should go. Hongdae, with its arts university scene, is famously suggested for those into subcultures and fun cafés. You’d never hear of it being recommended to history-lovers…until now! Now, you can experience olden-times Korea at Joseonsidae, a Joseon era-themed restaurant in Hongdae, Seoul.

Joseonsidae is a look back at historical Korea, tucked away down one of Hongdae’s busiest streets. You’d think it’d be hard to find amongst the bright lights and funky shop exteriors, but it’s old, hanok-style roof entryway makes it stand out from the modernity that surrounds it.

Venture downstairs and it’s a world away from the hustle and bustle of the Hongdae neighbourhood; decorated to be a condensed version of Seoul, people sit together at long wooden bench tables, on the floor in private rooms, or even on the palace-style pavilion. Swathes of cloth cover the ceiling, imitating an outdoor-eating area, a stone wall with traditional tiling separates the different areas, and one corner of the restaurant has even been turned into an olden-style jail cell. You can play traditional games, and also dress up as as people of the Joseon era, from a king or queen to people from the lower classes.

A taste of Korean history

The decor isn’t the only thing serving people tradition – offering a good variety of classic Korean meals, Joseonsidae has something for nearly everyone whether you prefer meat of the land or sea varieties. There are also vegetarian-friendly options, and dishes that can be modified to suit various dietary requirements.

My particular favourites are the pork dumplings, served with a shredded cabbage salad, the timeless bulgogi with glass noodles, and the thick kimchi pancakes. Alternatively, the bibimbap is a great, delicious option for people looking for something a little smaller. Though it’s usually topped with meat, you can ask for this to be removed to make a veggie-friendly version of a Korean classic. And with all main menu items being served alongside the standard side dishes, we guarantee no-one will be leaving hungry.

Drinking in history while drinking up

It’s worthwhile to note, however, that if tradition isn’t your thing then Joseonsidae is also a hotspot for eating and drinking before a night out. While it’s slightly more expensive than a regular pocha (a spot for drinking while eating a meal) many people head here for their concurrent dinner and pre-drinks before a night out in Hongdae’s famous nightlife. With a menu containing all the Korean alcohols you want, including both traditional and slightly more modern options, it’s the ideal place for lining your stomach and warming up for the night ahead at the same time.

It’s unusual to recommend Hongdae to history-lovers, but Joseonsidae is the perfect dinner spot for eating and drinking as though you were in Joseon times. Its décor will throw you back 150 years, and its great food and drinking scene will make your belly full and your cheeks red. Head here before a night out in Seoul’s artsy university district, and taste a little history before venturing out into the neon lights of modern Seoul.

Address: Seoul, Mapo-gu, Hongik-ro 3gil 44, basement
Opening Hours: Every day 00:00-24:00
Price: $$, Designed for sharing
Parking: No
Handicap Accessibility: No (1 flight of stairs down to the basement)

Seoul for Beginners: Top 8 Spots to Get a Taste of South Korea’s Capital City