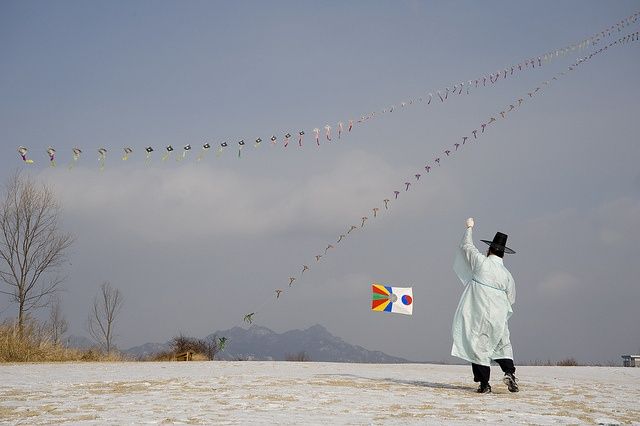 Kite flying, known as Yeonnalligi (연날리기) in Korean, is a folk game that most people play in the wintertime. Craftsmen originally made kites from thin bamboo pieces with a mulberry paper coating. Most of the ones you can buy now are made from nylon or a lightweight fabric and their long string is wound around a four-pegged wheel.

Most kites are decorated with bright colors – usually red, blue, yellow, white and black – as well as simple shapes like stars and moons. Some may be more elegant with symbols of fortune and love like bats or butterflies. Others may have Chinese characters on them that wish the flier good luck.

Korean kites often have a large hole in the middle, about half the diameter of the entire kite. This was an ancient way of monitoring wind control and helped the kite fly more smoothly. Shield in Korean is bangpae (방패), and one type of kite is called bangpaeyeon (방패연) because of its similar shape. They don’t have a tail and are people use them mostly for sky duels. This is where opposing flyers try to force another kite down from the sky by cutting the string using friction from their own kite string. Some people claim that it’s even more exhausting than shooting a bow and arrow! Do you think you would win?

The oldest surviving record of Korean kite flying is from the Samguk Sagi (삼국사기) – the records of the Three Kingdoms Period. It can be traced all the way back to the reign of Queen Chindok of Silla in 637 A.D. when the military set off a burning kite at night to trick the superstitious population into believing that a falling star was bringing good luck from the heavens. Would you have believed it? Historically, we know that the military used kites to send messages to other troops at a faraway distance. Who could have imagined that it would someday become something light and playful that we do with our families?

Nowadays, most Koreans fly kites during the Lunar New Year when families get together to celebrate. Most flying can be seen between January 1st and January 15th, also known as Full Moon Day. On that final day, releasing the kite by cutting its string helps to keep bad luck away in the new year. Seems like a pretty good idea to me!

Kite flying is a much beloved and ancient tradition of Korea. In fact, the 2002 Seoul World Cup Stadium resembles the shield kite (intentionally). The building is semi-rectangular in shape with clipped corners and features a large hole in the roof! Not only is the shape similar, but the material is fiberglass, which mimics mulberry paper at night when we can see the lit-up arena. Have you ever noticed that? Try taking another look.

Where to Buy & Make

While Insadong used to house several kite makers, a decrease in traditional style has seen many of them forced out. That being said, you can still visit many shops in the neighborhood for traditional shield kites that act more as decoration than true flying equipment.

The most convenient place to look is on Coupang, Korea’s online shopping website. You will be able to find a wide variety of kites in differing styles to suit your personal taste. And as much as we love the tradition here at Moon Bear Travel, modern kites are sure to last a lot longer in this pesky Seoul wind.

Feeling crafty? Why not try making it yourself? Here are some great resources for beginners:

We learned that Korean kite flying is an ancient tradition used for practical purposes that has transformed itself into one of Korea’s most beloved traditions. If you’re around Seoul, we suggest letting your kite fly near one of the many Han River Parks (such as Mangwon Park, Han River Park, Jamwon Park, Seoul Forest) for the most gorgeous views. Additionally, you could visit Sky Park (하늘공원) in Western Seoul for more mountainous views.

Looking for a more authentic experience? Check out the Kite Flying Experience Center located in Wonguman Village. Or join the festivities in Yangpyeong, Gyeonggi-do during their popular Icefish Festival.