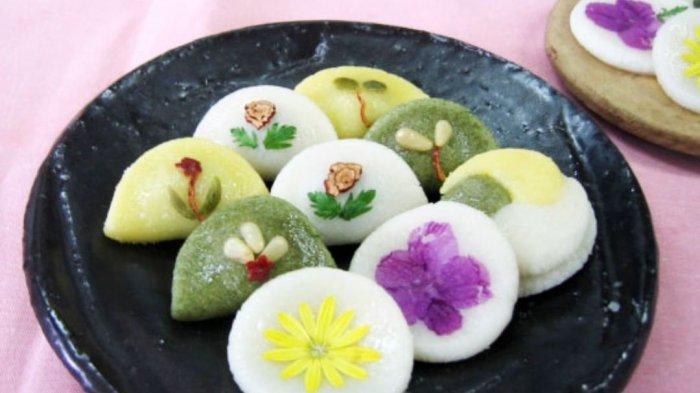 Love them or hate them, rice cakes feature in many Korean dishes. They can be soft and fluffy, or thick and chewy. Rice cakes, also called tteok, have been featured in Korean cuisine for thousands of years, even having their roots in prehistoric times. Nowadays, there is a huge variety of tteok available for us to much on— it can be hard to choose what to eat! So we’ve put together the top rice cake dishes and variations that you have to try.

When you think of tteok, this is the variation that comes to mind. It’s so quintessential that I didn’t even know it had a proper name; it often gets called soup tteok or tteokbokki tteok. There are a lot of dishes made with garaetteok such as tteokbokki (red pepper paste rice cake, 떡볶이), tteokguk (rice cake soup, 떡국), and tteokggochi (rice cake skewers, 떡꼬치).

Perhaps one of the most interesting facts about garaetteok is that the longest version of it was made in 2019, spanning 16,670 feet (5,080 meters). To make this delicious treat, non-glutinous rice is steamed, pounded and rolled between one’s palms. This gives it its signature cylindrical shape. Hand-rolled rice cake comes in various sizes and shapes, and can be cut up further to personal preference.

If you’ve had any kind of rice cake in Korea, it was likely this bad boy. For those able to handle their spice, be sure to grab some tteokbokki at any local mom-and-pop restaurant (some popular chains are Duggi 두끼, or Kimbap Heaven 김밥천국). For those visiting around the New Year, look for tteokguk on the menu, as eating it helps you get one year older. Although, some might find this be off-putting rather than a reason to indulge.

Songpyeon is a colorful, moon-shaped rice cake most commonly seen in the autumn. Autumn brings Chuseok (추석) or Hangawi (한가의), known as the Mid-Autumn Festival or Korean Thanksgiving in English. It’s arguably the biggest holiday of the year alongside Seollal, Lunar New Year (설날). Chuseok was traditionally held to thank ancestors for a bountiful harvest. The meaning has somewhat diluted over time to a festive gathering with friends and families, but it continues to honor the traditional snacks that are associated with its name. Perhaps the most famous of these is Songpyeon.

Songpyeon is formed in a half-moon shape and are filled with various flavors of honey, sesame seeds, red bean, mung bean, chestnut or jujubes. There are various stories as to why the rice cake is formed into a half-moon shape. The most widely accepted story is that Korean ancestors believed the round-shaped full moon could only wane, while a half-moon had the chance to grow larger. This was more in line with the abundance and prosperity of the harvest.

What gives songpyeon their unique flavoring is the pine needles in which they’re steamed over. This also helps to shape the familiar comb pattern on Songpyeon’s surface. The pine needles are used as fragrance and also to help prevent the cakes from sticking together.

Like most rice cakes in Korean culture, songpyeon vary in shape and size depending on the region of Korea.

Ggultteok can be translated into ‘honey rice cake’. They’re usually shaped into bite-sized balls with a pinched top. If you’re familiar with Chinese baozi, they’re like a mini version in terms of shape. However, the name gives a hint as to what’s inside! Honey rice cakes are filled with honey-infused syrup that pops in your mouth when you take a bite.

Most honey rice cakes are prepared with a plain coating and simple flavoring, but there are several variations that are also filled with sesame and some might come dusted in soybean powder.

Sirutteok is one of the oldest rice cakes in Korean history. In its original form, the cake is prepared by steaming rice and crushing red beans in a traditional steamer known as ‘siru’ (hence the name). Apart from its basic form, various recipes might add in other beans, as well as other flavorings, fruits, and nuts.

Sirutteok is not only a staple in rice cake cuisine, but in Korean culture at large. Red bean is believed to ward off evil spirits, making this rice cake a popular choice on special occasions such as the Lunar New Year.

Omegitteok hails from the beautiful Jeju Island, the largest island of the Korean peninsula. This rice cake has a unique connection to alchocol, as it was originally a by-product of omegi sul (오메기술), a kind of local liquor. The rice cake’s modern form uses different ingredients and is only marketed as ‘traditional’ to be sold more easily to visitors. That being said, their fabrication seems to have worked, as the snack is one of the most popular souvenirs from Jeju Island.

Jeju’s rough climate made it hard for rice or wheat to grow, leading to Jeju producing ‘chajo (차조)’, a type of local millet. This is what is used to make the rice cake according to tradition, and symbolizes how Jeju is famous for its own unique flavors. Although many argue this might make Jeju Island’s cuisine somewhat rustic, this is no longer valid due to modern flavor profiles and a wave of new crops. Additionally, omegitteok was not traditionally consumed by locals and was instead used as an ancestral offering during shamanic rituals. Marketing such a rice cake was never intended. However, its newfound fame began in the 2010s with the change in its taste and visuals. For example, chajo is no longer mass-produced and rice with infused mugwort and sugar is now favorable. You can even find some unique omegitteok chefs around Jeju adding foreign flavors into the mix, such as banana!

You can find a similar recipe here.

Hwajeon is translated to ‘flower pancake’, although it’s slightly smaller than its European and American counterparts. This beautiful rice cake is most commonly eaten during two festivals: Buddha’s Birthday and The Double Third Festival (삼짇날). The edible petals come from seasonal spring flowers such as cherry blossoms, violets and goldenbell flowers. If one were to make these rice cakes in the summer, rose is a popular choice while autumn cooking typically uses chrysanthemums. In the winter, flowers are understandably scarce, but Koreans are creative in using mugwort leaves and jujubes cut into flower shapes. It’s common for the juice or tea of these flowers to be enjoyed alongside their rice cakes. To make the cakes as sweet as they look, hwajeon are soaked in honey and sprinkled with cinnamon powder.

This rice cake is so beloved that there is a popular expression ‘hwajeon nori (화전놀이)’ or ‘flower cake play’ which is a tradition of going on a picnic in the mountains to see the seasonal flowers during spring and autumn. The custom dates back to the Three Kingdoms period (57 BCE – 668 CE).

The last rice cake you must try is one of my personal favorites, although it has a flavor profile that many may be unfamiliar with. This it ssuktteok or mugwort rice cake. It’s made from and tastes of these fragrant green herbs and tends to be described as more ‘aromatic’ than sweet. Its fresh herbal scent reminds me of spring, my favorite time of the year.

To help prevent the rice cakes from sticking, a thin layer of sesame oil is spread over the top, adding a nutty flavor. Ssuktteok is chewier in comparison to other rice cakes and gives off a nice, shiny glean. If you’re shopping for rice cakes and come across an all-green one, you’ve found a winner.

Korea’s Mother of Pearl Lacquerware: What it is and Where to Buy It

Korean Street Food to Keep You Warm in Winter