Korean Street Food to Keep You Warm in Winter 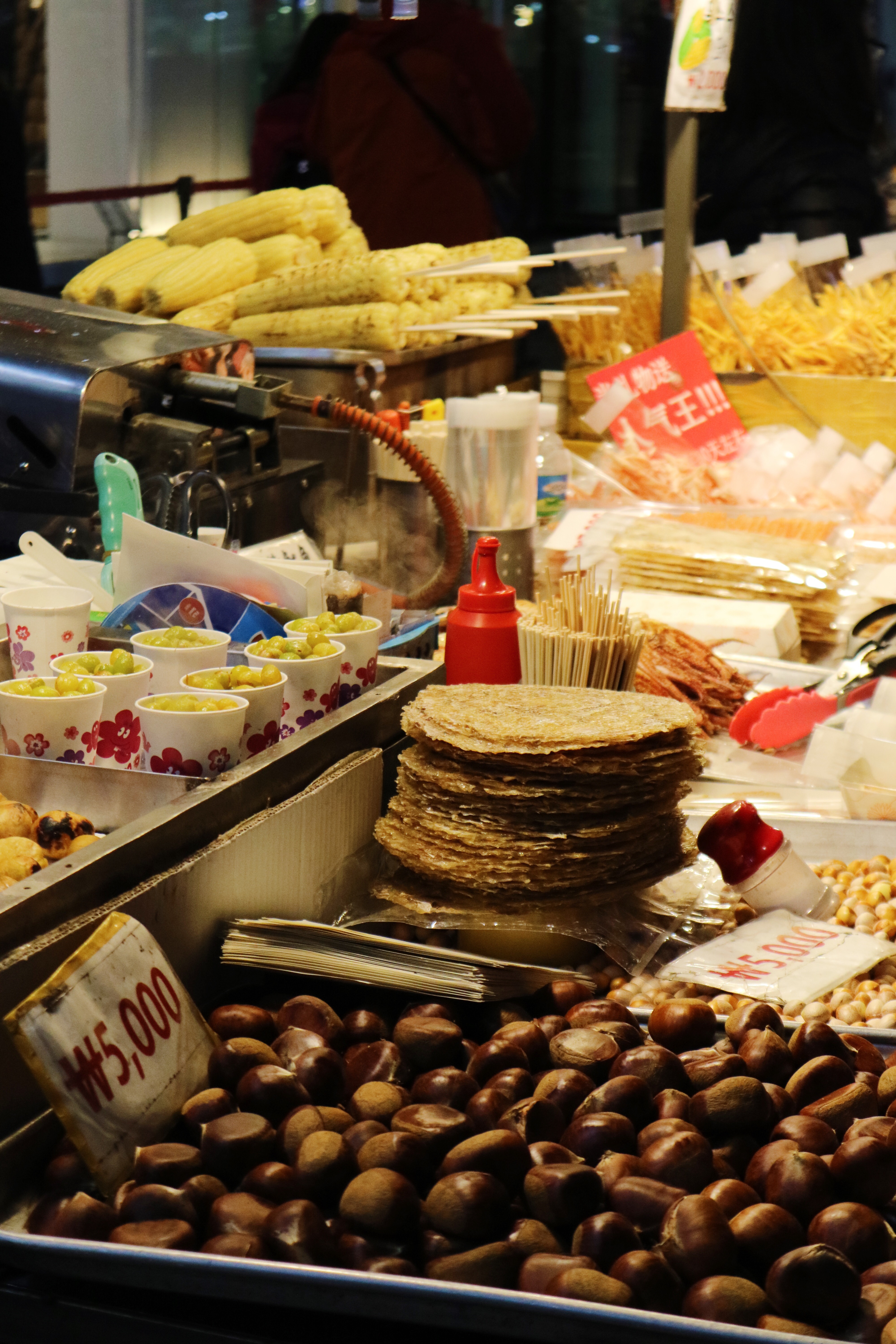 The ginkgo leaves have dropped, the duvet coats have been retrieved from the depths of wardrobes, and hot packs are being sold in every convenience store. Winter has finally set in here in Seoul after an unseasonably long autumn, and with it the cold weather has arrived. The wintertime can be difficult to enjoy here in Seoul, particularly if you enjoy being outside, so it’s important to find a way to keep warm while you wander the city. Sure, you can grab a cup of coffee to go from one of the many cafés that line the streets, but is there anything better for keeping warm than stopping by a street food stall and treating yourself to a delicious hot snack? Read on to hear more about the best Korean street foods to keep you warm in winter.

One of the most famous winter street foods to be sold here in Korea is bungeobbang, a fish-shaped sweet cake that has been filled with something sweet and then cooked in a waffle iron-like press. Typically, bungeobbang, also known as ingeobbang 잉어빵, is filled with a sweet red bean paste, but nowadays you can find bungeobbang in all sorts of flavours such as banana, cheese, Nutella and other things, and they even have sweet pastry shells instead of the sweet cake cases. These are best served fresh, though they’re so popular now that they are sometimes available in convenience store in red bean or chocoalte varieties. If you like it that much that you want to eat it all year round, you can even get bungeobbang ice cream – exactly the same as the winter snack, but with ice cream and read bean inside.

If bungeobbang is the Prime Minister of winter street foods, sweet potato is the president. Once November arrives, you can find sweet potatoes, called goguma in Korean, being sold in all manner of places from subway stations to street markets, and also in a variety of cooking styles. The most popular way to eat a sweet potato is roasted, and freshly-roasted goguma can be found everywhere, even in convenience stores. Other variations include the sweet potato being cooked and then covered in a honey and cinnamon sauce, or fried into long strips and and eaten like potato chips. However, the best sweet potato snack for keeping warm is definitely the whole roasted potato. The sweet flesh of the goguma is soft and fluffy inside the crispy skin, and it’s great for warming up your hands while you walk around an outdoor market.

Shamefully, I hadn’t eaten egg bread until this winter, despite being a huge egg fan and having received numerous recommendations from friends. Now, however, I fear I won’t stop eating it. It’s nothing particularly special – just a semi-sweet bread with a cooked egg on top – but it’s the perfect little winter warmer if you’re feeling a little chilly and peckish. Sometimes, you can find egg bread, known as gyeranbbang in Korean, which is cooked into a sort of egg sandwich with bread encasing the egg in the middle, but it’s most commonly found open-topped with one layer of bread and the egg cooked on top. Either way, you can’t go wrong with this simple winter snack.

As delicious as all the other street foods are, hotteok is my clear-cut favourite. What’s not to love about a deep fried rice flour doughnut filled with sugar?! Hotteok is a classic winter warmer street food here in Korea, and much like every other street food, there are different variations available. The most common type of hotteok available is honey or ggul flavour (not actually honey, but actually just melted brown sugar), but most popular is ssiat hotteok, which is hotteok filled with brown sugar and seeds. However, if you don’t have a sweet tooth like me, also available are vegetable hotteok, usually stuffed with stir-fried glass noodles and vegetables. Whatever your flavour preference, all kinds of hotteok are delicious, just be careful when eating it – the filling gets very hot while cooking, and the melted sugar is particularly prone to dripping out, burning mouths, and leaving your hands, clothes and everything you own sticky.

An absolute classic and front-runner of the Korean street food scene, tteokbokki is a family-favourite all year round, but with its spice and heat I think that this rice cake dish lends itself really well to the winter time. Sometimes served with cheese, fishcakes and vegetables, tteokbokki is a well-known Korean street food dish comprising soft and chewy rice cakes stir-fried in a spicy red pepper-based sauce. Served piping hot, it’s the perfect dish to warm you from both the outside and from the inside, thanks to the spicy sauce. Being such a classic, tteokbokki can be found on street food stands nearly everywhere, and also in convenience stores if there isn’t a vendor nearby.

So there you have our recommendations for Korean streets foods to munch on to keep you warm in the winter! It gets pretty cold here, so we’re going to make sure we stay toasty by snacking on some of these delicious eats. What would you eat to keep warm in the cold Korean winter? Let us know what you think in a comment, or tell us over on Facebook or Instagram!