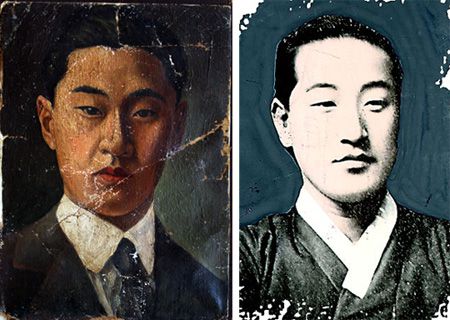 Lee Sang-Hwa (이상화, 1901-1943) was a great poet who left a large impact on modern Korean poetry. Most of his work openly criticized Japanese colonial rule (1910-1945) at a time when it was dangerous to do so. Through Lee’s written integrity, patriotism, and emphasis on the people’s responsibility, his work is a prime example of resistance literature in Korea.

Lee only lived for 43 years but accomplished much during his short life. His most famous poetry includes ‘To a Poet’, ‘Wailing’, ‘Against the Heaven’, ‘Does Spring Come to a Deprived Land’ and ‘I’ve Eaten the Sun’. Lee debuted in 1922 although most of his work dates from 1928 onwards. He wrote 64 poems, 2 novels, 22 proses, and translated 5 novels. In his earlier years of writing, most of his poetry was sensual and romantic. From 1923, he focussed on literary-style poetry until 1926. From this point onwards, he penned anti-Japanese sentiment, feeling strongly that writers have a responsibility to defend their nation’s language. A poet is, as Lee explained, a critic of ideology who should lead people by example in their daily lives. Thus, his poetry delivers the grim reality of his country in the early 20th century.

Lee had originally planned to go to France to continue his studies of French and English, but following the Great Kantou Earthquake of Japan in 1923, he quickly returned home to Korea. On record, 6,000 Koreans died in the tragedy, although other accounts put the number closer to 20,000. This is because some Japanese used the earthquake as an excuse to murder Koreans in the area.

In 1926, Lee’s published his most popular poem, ‘Does Spring Come to a Dying Land’. By 1928, Lee was put into detention and underwent torture during an interrogation session about the publishing of a pro-Korean newspaper. Years later in 1936, Lee went to Manchuria to visit his elder brother and subsequently traveled around China for three months. Upon Lee’s return to Korea, Japanese police searched his house upon hearing the news that he had written a patriotic song. During the investigation, his poems and manuscripts were confiscated. This led Lee to quit his job as a teacher and put all of his energy into writing. However, his health continued to decline and he passed away in 1943 from cancer.

In 2008, Lee’s house opened as a museum on the 63rd anniversary of Korea’s independence. It’s where Lee wrote his last poem, ‘A Doleful Melody’, before he took his dying breath. Today, the house is an education center and museum that will continue to promote Lee’s patriotic spirit to visitors from around the world.

Visitors can learn more about Lee, his work, and the works of other patriotic artists at the Lee Sang Hwa House in Daegu. The house remains mostly the same from when Lee lived and wrote here.