A Korean Tragedy Untold: The May 1991 Struggle 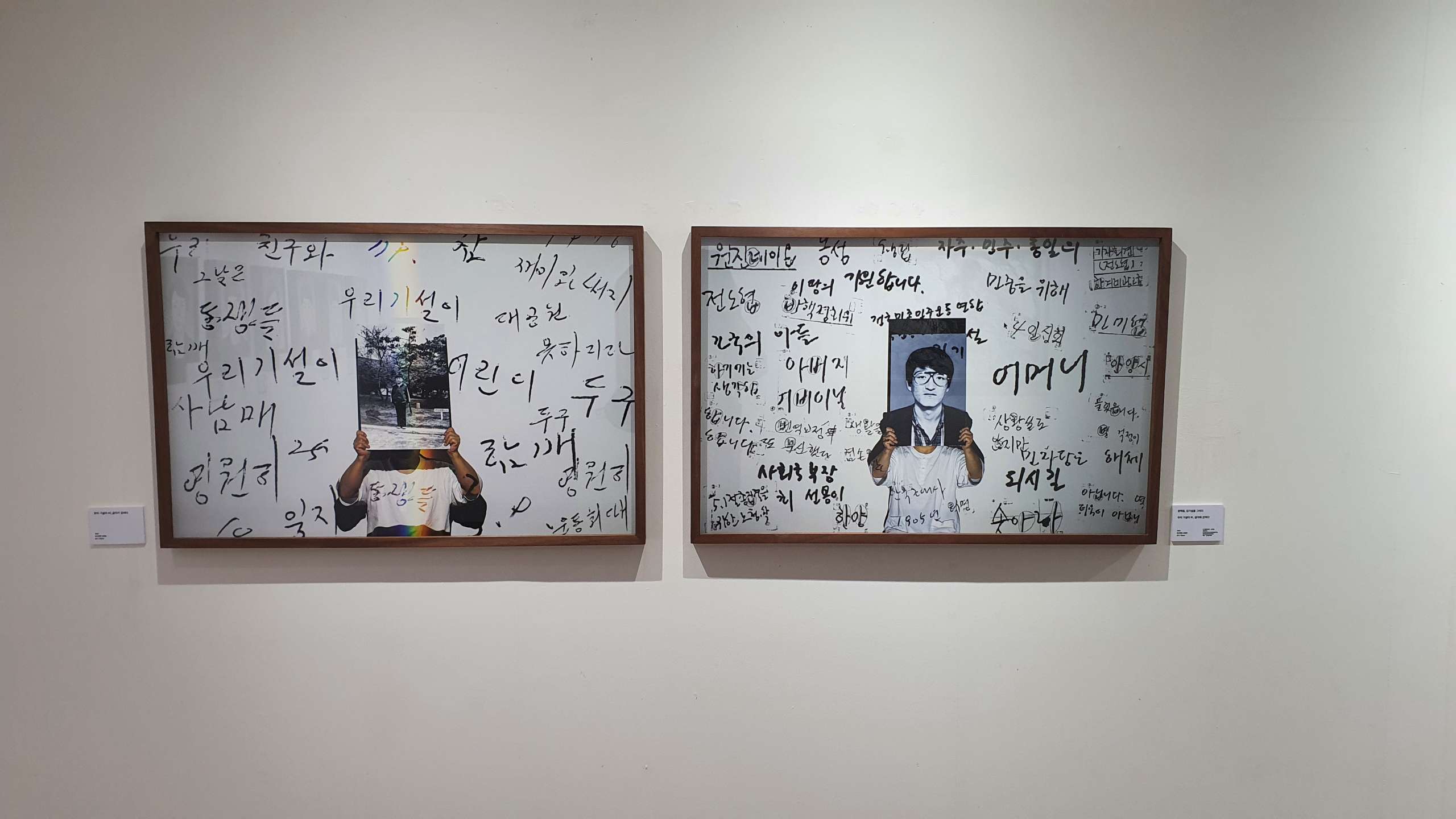 “Like a whistle to wake democracy from its slumber.”

During the struggle, the entire nation heard repeated news of protestors committing self-immolation in protest against the Roh Tae Woo regime. Setting oneself ablaze was the martyrs’ last gesture of resistance, a harrowing reminder that the state’s violence was enough to drive its people to the extreme. Prosecutors, the media, and some intellectuals took the noble sacrifices of the martyrs to an anti-human sentiment, beyond left-wing politics, pro-communist thought and mob activism. In the midst of ideological violence through newspapers and broadcasting, the May 1991 Struggle came to an end.

In honor of its 30th anniversary, the May 1991 Struggle takes center stage through the Lee Han Yeol Memorial’s new exhibition: Unforgettable Faces – May of 1991.

Kang Kyung-dae was born in 1972 and died on April 26, 1991. Kang first heard of the May 18th Gwangju Democratization Movement from his father. During his high school years, he learned about further social injustices as he began to follow members of the Korean Teachers’ Union. As a freshman of Myongji University, Kang was attacked with an iron pipe at the hands of riot police and later died from internal bleeding. The protest was to see victory for independent academies, rescue the president of the student council, and overthrow the military regime of Roh Tae Woo.

Kim Ki-seol was born in 1962 and died via self-immolation on May 8th, 1991. Kim Ki-seol was born in Paju, Gyeonggi Province. Shortly after his leave from the military, he joined the Seongnam Democratic Movement Youth Association (Civil Youth Union) in September 1988. He worked as a counseling secretary for the Seongnam Workers’ Home and served as the head of the social department of the National Democratic Movement Federation (National Confederation) from January 1991. On May 8, 1991, he burned himself on the roof of Sogang University while demanding the resignation of the Roh Tae Woo administration.

Kim Young-kyun was born in 1971 and committed self-immolation on May 1, 1991. Kim was a student in the Department of Folklore at Andong University and was responsible for establishing the Folk Culture Research Association under the Student Association. He served as its first president and additionally worked as an editorial committee for school journals. On May 1, 1991, at the rally ‘Pan-Andong People’s Resolution Conference to Commemorate the Late Ganggyeong University Martyr and to Crush Public Security Rule’, Kim set himself ablaze in protest.

Park Seung-hee was born in 1972 and committed self-immolation on April 29, 1991. Park was headstrong and loyal to her principles from a young age. She fought against the oppression of the Korean Teachers’ Union while studying at Jeongmyeong Girls’ High School. At 2 p.m. on April 29, 1991, in Chonnam National University’s May 18th Square, she attended the meeting of 20,000 students to condemn Kang Kyung-dae’s murder and to fight for the resignation the Roh Tae Woo regime. She set herself ablaze on campus.

Cheon Se-yong was born in 1971 and committed self-immolation on May 3, 1991. Chun entered Kyungwon University in 1990 and worked at the National History Research Association and the Modern History Research Association. He attended various demonstrations as a member of the student council. On May 3, 1991 during the ‘40,000 Students Resolution Conference for the Resolution of Roh Jung-kwon’, On May 3, 1991, during the ‘40,000 Students Resolution Convention for the Resignation of the Roh Government’, Chun sprayed thinner on himself before setting himself on fire. He threw himself from the second floor of the engineering college building, shouting protest slogans before making the jump.

Park Chang-soo was born in 1958 and died on May 6, 1991. Park was a chairman of Hanjin Heavy Industries & Construction’s Democratic Union. He worked hard during his lifetime to create better labor conditions. On May 4, 1991, the day of the ‘Kang Kyung-Dae Student Death Declaration and Public Security Crushing’ rally, Park, who wasimprisoned in the Seoul Detention Center at the time, was transferred to Anyang Hospital. Two days later around 5 a.m., Park was found dead in a back building of the Anyang Hospital. The exact cause of his death is unknown.

Yoon Yong-han was born in 1971 and committed self-immolation on May 10, 1991. Yoon met with other activists in early 1989 upon recognizing poor labor standards. He then registered with the Seoul Democratization Workplace Youth Association. On May 9, 1991, while attending a national convention in Gwangju, Yoon met Park Seung-hee who was still in recovery. On May 10, 1991, Yoon committed self-immolation. His will stated, “For the sake of true independence, democracy, and unification of the country, youth have become the prey of the Roh Tae-woo administration”.

Jeong Sang-soon was born in 1966 and committed self-immolation on May 22, 1991. Jeong was a high school senior at Boseong High School and worked in numerous fields. In 1991, Kim Cheol-soo, a high school junior and friend of Jeong, committed self-immolation and was later taken to Chonnam National University Hospital to recover from his wounds. Jeong often visited the hospital in tears. On May 22, Jeong set himself ablaze and jumped from the roof of the Chonnam National University Hospital morgue. He proclaimed, “Workers, fight! Citizens – let’s breathe together, shout together, and fight together!”.

Son Seok-yong was born in 1970 and committed self-immolation on August 18, 1991. He was an active member of the Cultural Club and wrote dozens of poems about citizens while also founding the club ‘Liberation Ground’. During a vacation leave from the army on August 18, 1991, Son committed self-immolation at Daegu National University. He left behind a will for his parents and died with the last words, “National liberation, national reunification”.

Yang Yong-chan was born in 1966 and committed self-immolation on November 7, 1991. He loved Jeju, his hometown, and joined the Seogwipo Country Love Youth Association, and participated in the ‘Seogwipo Regional Problem Countermeasure Committee’, taking an active interest in various regional issues such as the development of the Seogwipo region. On November 7, 1991, Yang burned himself while shouting “Stop Special Law!” and “Overthrow the Democratic Liberal Party!”. He left a suicide note saying, “Rather than the world’s second-best Hawaii, we want Jeju Island as our home”.

A Fighter to the End

Kim Gwi-jeong was born in 1966 and died on May 25, 1991. Kim entered Sungkyunkwan University in 1988 and joined the Simsan Research Society, a unification research club. “I won’t live only in favor of myself,” he vowed. On May 25, 1991, he participated in the ‘3rd Pan-National Conference to Resign Roh Tae Wo’s Regime, Disrupt Public Security and Ensure the People’s Livelihood’. He collapsed during a police’s crackdown and was never able to get back up.

Kim Cheol-soo was born in 1973 and died via self-immolation on May 18, 1991. Kim was born in Boseong, South Jeolla Province, the second of three sons and three daughters. Through clubs at Boseong High School, Kim learned about the graveness of occurring social injustices. During an anniversary event for the May 18th Gwangju Democratization Movement, Kim set himself ablaze on the school’s playground. He collapsed shouting, “Realize true education!” and “Resign the Roh Tae Woo regime!”. He left a will that stated, “I believe in all of you!” and died two weeks later.

Although Kim Cheol-soo’s memory bears the burden of being a patriotic martyr, it is the artist’s intention for these pieces to remember Kim as an ordinary boy.

The video installation behind the curtain honors Lee Jung-soon and was made by Jeon Kang-hee. The title is ‘Five Scenes’. Video run time is 40 minutes.

Lee Jung-soon was born in 1925 and died in 1991. Lee was born in Suncheon, Jeollanam Province, and graduated from Suncheon Nam Primary School. As the eldest daughter of seven siblings, she worked as a bus guide, a wig factory worker, and a chef, supporting her family and school tuition of her younger siblings. She was a devout Catholic and left behind many virtuous poems and writings. On May 18, Lee jumped from the railroad bridge in front of the main gate of Yonsei University during the funeral procession of Kang Kyung-dae. She was 39 years old. Upon entering the installation, select a space before or after 1991 and listen to the poems of Lee Jung-soon.

The following is a description of the exhibition’s display cases.

Inside you can see Kang Kyung-dae’s diary. On May 26, 1989, Kang visited Myeong-dong Cathedral. He asked his mother to cook lunch boxes for teachers fighting for the establishment of the Korean Teachers’ Union. The photograph depicts an alleyway of Myongji University on the police attacked Kang. Another photograph is of Kim Young-kyun at the time of his self-immolation; he burned himself on campus during a rally at Andong National University on May 1, 1991.

In the left case is the suicide note left by Kim Ki-seol, who burned himself to death on the roof of Sogang University on May 8, 1991. You can also see Kim Gwi-jeong’s diary and photo. Police blocked the entrance to the alley and fired tear gas and apple bullets over the protesters’ heads, beating them mercilessly with shields and clubs. Visitors should also note Lee Jung-soon’s handwritten will and prayer. Lee committed self-immolation while jumping off of the railroad bridge next to the main gate of Yonsei University on May 18, 1991. In the left display case, visitors can view newspaper articles from the time. The articles demonstrated how the truth of the May 1991 Struggle was distorted by the press. Some daring media sources tried to capture and spread the truth.

It is not possible for democracy to be realized in a single moment; democracy must be fought for, created and developed over time. This is what the Lee Han Yeol Memorial Museum dedicates itself to every year, though their Unforgettable Faces series. It was my honor to work with them as the English voice and translator for their May of 1991 exhibition. The sacrifices made in the spring of 1991 awaken us today like the sound of a piercing whistle.

A Guide to the Seoul Museum of Craft Art

A Historical Tour of the Gwangju Uprising: Complete Travel Guide